Indiana Jones and the Kingdom of the Crystal Skull (2008)

It took me a few hours and the dark silence of my bed to isolate what all the negative critical fuss boils down to with the latest (and last?) Indiana Jones flick. One of the most anticipated movies of all time – if you missed it – premiered at Cannes with predominant disappointment. Naturally, the tepid response revolves around comparing Kingdom of the Crystal Skull to its predecessors in the series, an older Harrison Ford to a youthful one, a newcomer to a classic; but like any good archeologist will tell you, one must look deeper to uncover the underlying truth. Nearly every review of the film – both “professional” and layman – even when kind, begins and ends with a frame by frame analysis in relation to the original trilogy. Is that fair? The answer is absolutely and absolutely not. It really depends on how one approaches the movie and what specifically you are asking (demanding!) of it. For some, seeing Dr. Henry Jones, Jr. again, cracking the whip and smirking amid exhaustion and impossible odds, is the fulfillment of a nineteen year fantasy. This group would never even consider judging the fourth installment as an isolated work. Revisiting the past is half the fun. However, for just as many, the film will be a relative introduction to the character or maybe just something to do on a Saturday night. When a sequel to a beloved institution is released nineteen years after the last go-round, its reception by audiences both old and new makes for one great sociological experiment. And this is precisely what we are witnessing with Indy 4.

The one question today's audiences and media types don't seem to be asking themselves is the one that is most fundamental: What if I were watching Crystal Skull and I was the same age as when I first saw Raiders, or Temple of Doom, or The Last Crusade? More accurately: Would Crystal Skull mesmerize me with the same wonder and awe that those films did when I was young, impressionable, and came to movies with an open heart and mind? Would it elicit the same passion and devotion?

Although I am as beat down by time and circumstance as the next thirty year old with a job and family, I venture that the answer to the question is yes. Before I get to explaining why this is so, it must be pointed out that because Crystal Skull fits as nicely into the sacred trilogy as the other sequels to Raiders (the true flawless gem of the bunch), I must conclude that the negative sentiments expressed in reviews are merely reflections of the viewer having changed. Yes, it is the reviewer that has altered his tastes. The core Indiana Jones audience – all grown up – simply carries a faded tolerance for George Lucas and his campy, (for lack of a better term) nerdy brand of storytelling. Instead of recognizing that we, as an aging audience, have forfeited those magic glasses we used to see movies through, we lash out in denial and blame the story or the action or the star. In reality, Crystal Skull provides every element as it rightly should and the experience is equal parts fun, thrilling, and surreal – yet our (by comparison) unenthusiastic, disaffected reaction to it all sends shockwaves through our systems. We were hoping for something more elative, something glorious, something, perhaps, miraculous. We scratch our heads and ponder why we can't get “into it” as we once did. Instead of it resulting in a stunning moment of self-realization, we blame the movie for not doing its job. I'm sorry to tell you, folks, but those yesteryear days in the theatre don't come back….no matter the wishful thinking or how nostalgic the formula. And if there was a formula to bring a sense of childhood back through cinema, I assume it would involve re-appreciating the films of our youth, not by watching a hot off the press sequel with all the players twenty years older (some admittedly dead).

Not to range too much farther from the primary subject, but try watching Star Wars today. One of the greatest films of many a moviegoer's childhood, one a fan would blindly swear stands the test of time, is nearly unwatchable as an adult.

Harrison Ford is front and center once again….and it's been a while since Mr. Ford earned his paycheck. The most bankable actor of all time (until Will Smith leapfrogs him soon enough) is a thrill to watch as he returns to something he is superb at. Sure, Harrison Ford has been good in plenty of movies, but in recent years he has been okay in bad movies. It wasn't quite the same sensation watching Ford portray Indiana Jones again as it was to see Stallone reanimate Rocky, but it was much closer than it should have been. Ford wasted far too many years on the wrong projects. He became somewhat of a stranger to his fans over the past decade (an exception, 2000's excellent What Lies Beneath), and just to see him back in top form requires a standing ovation.

After an initial gasp at seeing Ford as Indiana Jones after so many years, his face longer, sallower, the eyes adjust and the aura of his oldness disappears. As Indy escapes from mercenary KGB treasure hunters and encounters his nemesis for the day (Cate Blanchett, appropriately camping it up), he seamlessly becomes the brainy, brawny hero we followed on grail quests, into snake pits, and across precarious rope bridges. From that moment until the sweet storybook conclusion we are caught up in the adventure and entertained as well as an audience can expect. There are plenty of grandiose action set pieces, perfectly choreographed, whimsical chaos in the patented Indian Jones style; the kind where you hold your breath until John Williams and his second skin score releases you. The one with the wave of killer ants is a gruesome stand out, on par with any sequence from the prior films. Did I scream out “Yeah!” and high five my friend when Indy saved the day at some point or another as I did when I watched Temple of Doom? No, but I'm also not ten anymore.

One of the interesting ironies of the Crystal Skull backlash is that a chief complaint has been that the film adheres too strictly to the standard Indiana Jones formula. That it appears at times as if it is marking off a checklist with each scene (melting skin – check, scared of snakes – check, crawling vermin – check, creepy, painted, tribal assassins – check). Lucas and Spielberg are being persecuted for giving young people a chance to have the same rollicking good time you and I had when we experienced Indiana Jones for the first time. It's not fair to ask the film to appeal to your somber, jaded adult sensitivities when the reason you fell in love with Indiana Jones in the first place was because it was the stuff of boyhood daydreams. 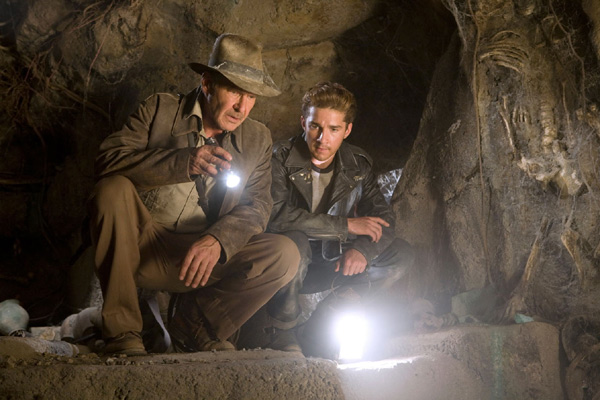 Also baffling is the critical dissatisfaction with the movie's extraterrestrial themes. As if such preposterousness is beneath a franchise so academically sound. As if Indy meeting up with alien mythology strains credulity. Are you kidding me!? Do you remember the removal of a beating heart? How about the ghostly knight protecting the grail? The only thing incredible is an entire group of bitter movie critics' astounding capability to reimagine history in order to suit a forced argument.

Although Indiana Jones is embodied by a human actor, he is a fictional character and as such he lives forever. We are not so lucky. We are the ones who must come to grips with mortality and somewhat pathetically rely on escapism like movies to distract ourselves from the relentless passage of time.

The exuberant, spirited Indy has stayed the same – ask any kid leaving the theatre. It is we who have matured and moved on, and it's not the good Dr. Jones' fault.

Next post Rabbi Ari Berman is LEAVING the Jewish Center