10.) When the Falcons take the field, someone must inexplicably mention that they davened at Beth Jacob in Atlanta thirty years ago on an NCSY Shabbaton   9.) ... 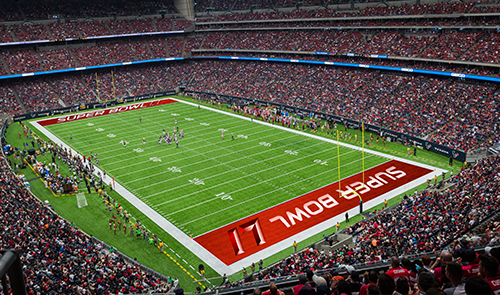 10.) When the Falcons take the field, someone must inexplicably mention that they davened at Beth Jacob in Atlanta thirty years ago on an NCSY Shabbaton
9.) Someone spends the entire 2nd quarter trying to prove that The Rav was a huge Patriots fan based on a footnote in Halachik Man.
8.) The most religious crowd has no problem watching Lady Gaga grind in a transparent leotard because “she’s a huge supporter of  Israel.”
7.) “Kickoff” of a 3-hour rambling political Israel debate will commence once someone casually mentions that Tom Brady is good friends with Trump.
6.) The host’s dad keeps pronouncing Matty “Ice” as  Motti “Ice.”
5.) After every play Julian Edelman makes, good or bad,  one obnoxious person will remind everyone that, “his father is Jewish, his mother isn’t.”
4.) The loudest cheering of the night comes during the commercial for Sabra Humus.
3.) 85% of the people in the room have a story about how they could have been in Houston for the game if they wanted.
2.)  One annoying dude keeps making the same joke:  “Why isn’t SuperBowl LI being played on Long Island?”
1.) The Jets fan in the room spends the entire game spewing vicious hatred against the Patriots, followed by the required caveat: “but that Robert Kraft…he’s a real mensch.”
Tags: footballlady gaganflsuperbowltom bradyTrump

About the Author Bangitout Staff