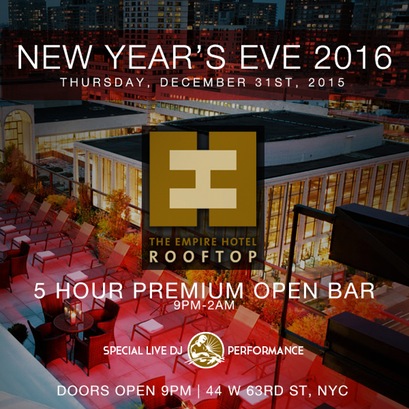 Empire Hotel Rooftop
44 West 63rd Street
New York, NY 10023
212-366-0752
December 31, 2015, 8pm-4am
The Empire Hotel Rooftop has been at the forefront of New York City nightlife venues, and this New Year’s Eve, you’ll see why. Get your fill of all the drinks you fancy at the five hour premium open bar. Curb your appetite with some delectable and complimentary lite fare, served in the early evening. A live DJ will be providing a smooth and sizzling soundtrack to your New Year’s evening, handpicking only the hottest Top 40, Hip Hop and Dance hits for you to enjoy all night long. Keep an eye on the clock, because right around midnight, you will receive a complimentary glass of champagne that will make the live countdown to the New Year even more picturesque. For the guests who are interested in the Empire Hotel Rooftop’s incredible VIP Extras, we invite you to indulge in the VIP options that get you VIP access to the West Terrace, Table and Bottle Service and exclusive reserved seating.