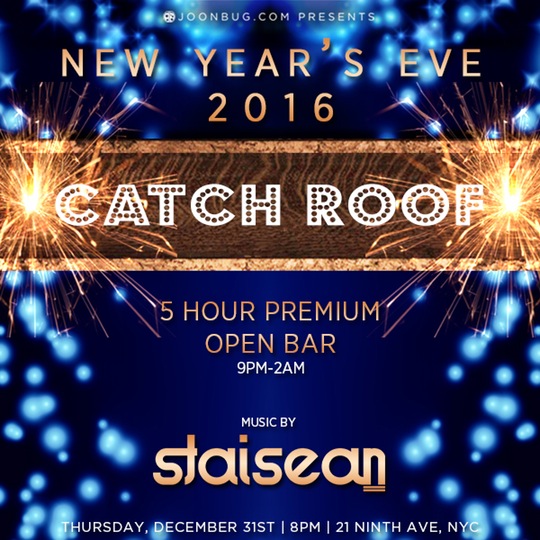 A nocturnal lookout located atop 21 North Avenue, CATCH Roof Top completely glass interior opens to panoramic views of New York City’s skyline, acting as the perfect back drop to a sparkling evening. Ultra-sleek interiors set aglow with the light cast by seemingly endless rows of oversized cylindrical lights and plush round booth seating allow you to immerse yourself in luxe decadence, partying in A-list style like Marc Jacobs, Kate Upton, Common, Miranda Kerr and Brad Pitt, whom have all been spotted at this chic hotspot.

This New Year’s Eve, make your descent through Manhattan and ascend to this exceptional venue nestled atop CATCH restaurant. Be the center of envy, sipping cocktails from the premium five hour open bar, while you carry on bubbly conversation between indulging upon small plate bites of complimentary early-evening hors d’oeuvres. Following upscale indulgence, make your way to the dancefloor where you can be found glimmering to the beat of a live DJ performance into 2016. To commemorate the special occasion, holiday amenities include a complimentary champagne toast and a live New Year’s Eve countdown led by the evening’s ultra-talented emcee. In addition to the aforementioned amenities, CATCH once again raises the bar by offering exclusive VIP packages which include private seating and bottle service among other perks.
Join us Thursday December 31, 2015 at CATCH Rooftop for a special new year’s 2016 event with special guest Djs!