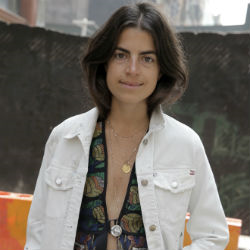 After 12 years writing “The Ethicist” for The New York Times Magazine, Randy Cohen invites you to his new project, Person Place Thing, an interview show in which one amazing guest tells three insightful and often hilarious stories.Join us for this December as Randy welcomes fashion blogger Leandra Medine, founder of Man Repeller and author of Seeking Love, Finding Overalls. Launched in 2010 as a humorous site for serious fashion, ManRepeller has since grown into a multimedia platform and a microphone for women. As an entrepreneur, Leandra has been honored in Fast Company’s “100 Most Creative People in Business” and Business Insider’s “Most Inspiring Innovators and Entrepreneurs Under 40,” and thrice named to Forbes’ “30 Under 30.” Leandra received her degree in Journalism from The New School and lives in New York City, writing daily while running the business and lobbying against pants.Photo by Krista Anna Lewis