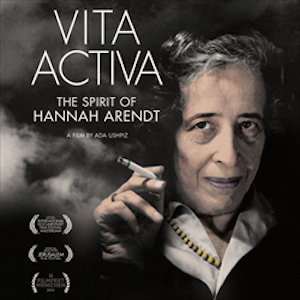 Tue, Mar 22 – Tue, Mar 22
07:30 PM – 09:30 PM
$9 members / $12 public
Dir. Ada Ushpiz (Israel/Canada, 2015, 124 min.)Hannah Arendt, a well-known German-Jewish philosopher, caused an uproar in the 1960s by coining the controversial concept “banality of evil,â€ in reference to the Nazi regime. Her private life was no less controversial, due to her love affair with the renowned German philosopher and Nazi supporter Martin Heidegger. She was one of the most influential thinkers of the 20th century, who lived through and wrote about the open wounds of modern times. Today, Arendtâ€™s insights about the nature of evil, the plight of refugees, and the dangers of any ideology are more relevant than ever. The deep humanistic message at the core of her thinking is equally relevant. This film offers an intricate portrait of Hannah Arendt, showing the places where she lived, worked, loved, and was betrayed. Through the creative use of archival materials, the film also revives her brilliant analysis of the turmoil of the 20th century.