The Debt
The title of John Madden’s film suggests that there is a central debt at play, plaguing his protagonists and propelling the action. The Debt is the sort of film that opens with graphically brutal evidence of a corrosive lingering torment, of past sins, of omnipresent demons to grab an audience’s attention, and then whisks them back to discover and analyze where such destructiveness comes from. We’ve seen such things before. The Debt, for all its heart-stopping power and subject-matter gravitas, is not without its fair share of cliché.
What makes The Debt truly interesting, beyond narrow escapes and Nazi hunting, doomed romances and calculated betrayals, is the pathological makeup of the debt behind the debt behind The Debt.
The film is based on a 2007 Israeli feature of the same name (in Hebrew, Ha-Hov) written by Assaf Bernstein and Ido Rosenblum. Combining extensive flashbacks with a mysterious, challenging present, The Debt depicts the fictional mission by three young attractive Mossad agents sent to track, infiltrate, abduct, and capture Dieter Vogel, a former Nazi “surgeon” hiding/living in 1966 East Berlin.
The tense, dependent relationship thrust upon the three agents (portrayed deftly by Jessica Chastain, Marton Csokas, and Sam Worthington) amid immense pressure, both on a personal and nationalistic level, operating in a claustrophobic, wretched work environment, provides an engaging dynamic to explore, and Madden succeeds in putting his audience in the foxhole. There are smartly concocted scenarios of escalating trepidation (the train station fiasco to name one) on par with the best of Brian De Palma.
Far less successful in terms of performance, atmosphere, and material is the thankfully limited forays into the present. It is highly unusual to see the likes of Helen Mirren and Tom Wilkinson struggle to make a character believable, but as the haunted adult versions of our Mossad agents, they do. The screenplay, by Matthew Vaughn, Jane Goldman, and Peter Straughan, gives these esteemed actors little to do of substance beyond acting “conflicted” and “distressed.” Their motivations are as suspect as their Israeli accents. By the time Mirren is sent on a preposterously implausible mission, which winds to an ever more ludicrous conclusion straight out of a B caliber suspense flick, we’ve nearly lost our faith. In the end, it is as if we have watched two movies. One as good, stirring, and nuanced as the other is bad and tone deaf. The superior strength of the flashback scenes (with particular credit to Jesper 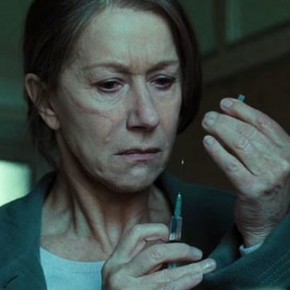 Christensen who submits chilling work as the ex-Nazi being stalked) carries the film and makes one lament that the writers complicated matters with superfluous layers.
What simultaneously raises The Debt (at least for the sons and daughters of Israel) is its keen understanding of a post-Holocaust Jewish psyche and the manner in which an emboldened Israel provided the muscle to make manifest Jewish aggression. Because going after Vogel was not for Israel a strategic strike or a defensive imperative, yet the mission is treated with life or death necessity. Israel was prepared, and evidently felt the obligation, to hunt down, try, and punish Nazi war criminals, even as they were aging, disengaged, and harmless.
The debt which appears on the surface of The Debt relates to a cover-up, professional guilt, and a devastating loose end. Underneath such mundane movie thriller fare is a more comprehensive debt. One owed to a people by enemies who have shed their blood. Blood which cries up eternally from the ground and blood which will never wash clean from our murderers’ hands.
Tags: filmhollywoodmoviesrecapreview