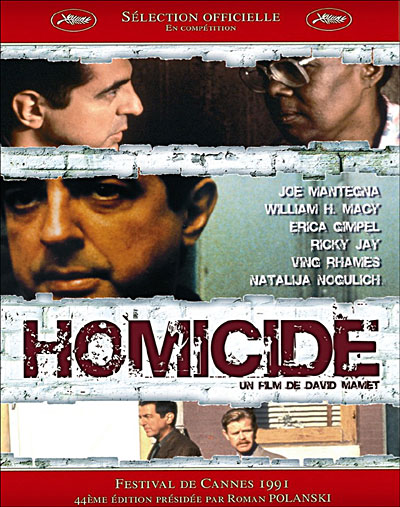 Homicide, David Mamet's ponderous film about a Jewish cop losing his way, loses its way whenever it wanders from the scene of the crime. Mamet's talent as a hard boiled writer for the screen and stage is often on display in this story of Detective Robert Gold (reserved, vulnerable Joe Mantegna) “catching” a small case while in hot pursuit of a big case, but Mamet has Gold on an existential journey of discovery that allows for no accidents.
If you read Mamet's The Wicked Son (2006), his stream of consciousness rant about anti-Semitism, Jewish destiny, and our eccentric God, you would know that Mamet, not easily discernable as a Jew based on his work (unlike, say, Woody Allen or Neil Simon), is quite smitten with his Judaism. Despite a professional choice to write mainly about other topics, Judaism consumes him. So much so and with such passion and zealousness that it appears in his personal life he constantly walks the line between crusader and madman. His writing style in more popular works like Glengarry Glen Ross can be viewed as his replacing powder kegs on the brink of explosion with sharp words and dialogue. When it comes to Jewish paranoia, Mamet is equally volatile. Add to these anxieties and preoccupations his genius of artistic expression, and Homicide, Mamet’s third directorial effort, promised to be a fireworks display of soul bearing pathos and rhetoric unlike anything else in the writer’s pantheon. And it is, but that turns out not necessarily to be a positive progression. The marriage of Mamet’s two obsessions manages to neutralize and obscure both.

Gold’s hardscrabble unit is on the trail of major crime figure Randolph (Ving Rhames in one of his first feature film roles) which brings the FBI to town and in an early scene Gold and a condescending FBI agent butt heads. The agent dismissively calls Gold a “kike” and from that slur we learn not only that Gold is Jewish, but based on his reaction to the insult that he is terribly uneasy about his ethnicity. Cops are supposed to be Irish like Gold’s partner, Sullivan (played by William H. Macy with his typical brand of weaselly muscle), and Mamet defines the difference between those meant to be and those forever outsiders as a glaring chasm. While Gold is certainly accepted by the squad and respected, he regularly fumbles with his gun, gets attacked by a thug early on but refuses to press charges, and most significantly, he is designated the manipulator of the group. Gold is sent in to speak with reluctant informants and witnesses, to seduce them with falsely sympathetic words and hand holding, gain their trust, exploit their moment of weakness, and betray them. Gold, the Jew, can convince a mother to turn on her own son. Gold, the Jew, is softer than the others, more cerebral, more sensitive, less comfortable with the blue collar, macho, aloofness that his fellow officers carry off with such natural aplomb.
On the way to question a known Randolph associate, Gold and Sullivan come across a murder scene in a poor, black neighborhood. An old Jewish woman was shot in her store and the young kids behind the police tape claim to know the killer’s motive. “They were after the fortune in her basement,” they bellow repeatedly. Gold is soon told that he’s off the Randolph investigation and that he’s caught the Klein murder. Mamet has already signaled that quite the opposite is true. The Klein murder has caught a tumbling, aimless Gold.

Much of Homicide deals with Mamet’s argument that, as Jews, no matter how we delineate or categorize ourselves, we can’t ever escape a unifying collectiveness. Whether agnostic cop or Yiddish speaking doctor, we are in the same rickety boat. The Kleins are awkward, unappealing, ultra wealthy Jews who communicate with outsiders rudely and disdainfully, and exhibit an unsavory sense of entitlement. They likely represent everything Mamet hates about a well represented grade of Jew and his disdain is reflected through Gold. Over Gold’s adamant protests to be taken off the case, he’s coldly told by the captain to stop complaining and to deal with “his people.” Gold responds that the Kleins are not his people. They disgust him. The pay too much taxes. The make him sick.

Homicide’s setup is rather exquisite. It’s engaging to find Gold on a fateful road where his affiliations as dedicated officer and apathetic Jew come into conflict. Mamet provides an intriguing crime that, in classic thriller format, requires much unraveling before resolution.
The downfall of Homicide is Mamet’s abandonment of a pure criminal investigation noir with Jewish undertones in order to explore a sordid and convoluted array of Jewish identity issues. Yes, all the revelations and introspections are delivered somewhat in the context of examining evidence found in continuance of the Klein murder investigation, but Mamet is clearly interested in other things. Klein and who actually killed her are essentially irrelevant. Mamet wants to uncover secret plots to kill the Jews by neo-Nazis and the covert militant Jewish organizations that combat them. He wants us to believe that Gold will find peace and his Jewish essence by blowing up a shop that fronts for a Jew hating propaganda machine (“Crime is caused by the Ghetto, the Ghetto is caused by the Jew!”). The bizarre extremes to which Gold is rather easily pulled in reaction to his sudden Jewish calling remain both unconvincing and troubling as the narrative begins to fragment. Watching the film is truly like experiencing the ebbs and flows of Mamet’s raging inner storm. Sometimes his pulp, clever writing takes over, sometimes his Jewish compulsions win the day. The effect is jarringly uneven. We are asked to believe a range of premises just before they are discounted by a drastic, unsubstantiated turn of events.

Mamet wrote The Wicked Son fifteen years after scribing Homicide, and it is disheartening to fathom how little insight he gained into his own Judaism over that period. He is absolutely correct that Judaism and what being Jewish critically means can and should be a daily struggle, but to merely increase the size of the question mark daily is a vain and bitter pursuit (though many Jews do live that way).

Because of Mamet’s own uncertainty, he winds Gold’s odyssey to an ambiguous destination. A concrete maze that hits a brick wall. A cluttered staircase that leads up, up, up, and eventually to a roof beneath a city’s night sky where no answers are written in the stars. Was any of it real? we are left wondering. Are we only different in our minds? Is our victimhood a figment of wildly paranoid imaginations?  Mamet has no more insight than the rest of us. Just another Jew being cautious, watching his back, ready to sound the alarm.