Herzl: It Is No Dream

If the names and faces of our modern state of Israel’s pioneers mix together like so much tehina and chumus in your head; where Golda Meir merely earns the distinction as the female one, you are not alone. Even accomplished filmmaker Richard Trank realized that despite the overwhelming attention and scholarship dedicated to the birth of a Jewish nation, even the educated masses are fuzzy on the details.

While conducting research for his documentary Winston Churchill: Walking with Destiny, Trank came across the figure of Theodor Herzl as if for the first time.

“In the mid-20th century, Herzl’s name was uttered in the same breath as world leaders and philosophers. He was a dominant personality…and then forgotten,” Trank said, speaking from his office in Los Angeles. “I wanted people to know that this is a man who had tremendous vision. 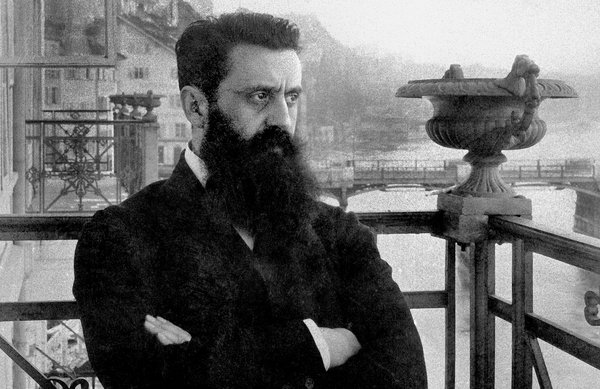 In the late 1800’s, Herzl saw what European anti-Semitism was mutating into (heavily moved by the Dreyfus affair) and had a vision for a Jewish homeland in Palestine and said in fifty years it will happen and within that time it did.

”The result of Trank’s aspiration is It Is No Dream: The Life of Theodor Herzl, a blow by blow, thoroughly researched rendering of the Hungarian secular journalist’s instrumental part in taking Zionism from the theoretical to the actual. Herzl said, “If you will it, it is no dream,” and Mr. Trank has willed the epic story of Herzl into existence.

Although many great men and women played key roles in making Israel happen following the First Zionist Congress in 1897, designed and chaired by Herzl, all others muddled through within the context of the reality Herzl constructed from fantasy. And although the story of Israel is a series of nissim and niflaot, Herzl’s unlikely call to action and unlikelier success makes for chilling inspiration and real life drama.

“I wanted people to understand what he sacrificed,” Trank said. “How difficult the kind of travel it was at the time when Herzl was going all over the world to appeal to Jewish community leaders, wealthy Jews, and the powers that be. He was a fairly well known writer and journalist, but getting a meeting with world leaders was not easy.”

If there is one quality Herzl possessed that Trank’s film accentuates, it is pure determination. Herzl may not have been the best speaker or writer on the planet at the time, but he was the most committed to his mission. The highlight of the film is also the culmination of Herzl’s journey when he spoke to an audience of delegates at the First Zionist Congress in Basel Switzerland. It is the kind of moment that rests in historical fact, but remains surreal. “It was the first gathering of this nature since the Diaspora began with such a cross section of Jews,” Trank marveled. “From secular atheist to religious.

”The film, as an educational tool, is exhaustive. Trank appears to have been so impressed by Herzl’s accomplishments that every detail – relevant or otherwise – is recounted. With the authoritative voice of Ben Kingsley narrating and the irksome voice of Christoph Waltz (former Inglourious Basterds Nazi) as Herzl, we are ushered through the process, from inception to completion, also learning about Herzl the family man along the way. Considering the stakes, I would have expected more excitement than Trank delivers. Many facts and circumstances are portrayed academically, when emotionally would have been preferable. Basel is heart warming when it should have been scintillating Regardless, the value of It Is No Dream lies in its message and the reminder of where we came from and where our debts are owed. Herzl passed away in 1904, only living long enough to see the first fruits of his labor, but certainly not its harvest. Trank begins his film with a shot of the gravestone and monument honoring Herzl on the mountain named for him in the land that he envisioned. Har Herzl is the national cemetery of Israel where its heroes are buried, proving that Herzl’s dream came true. To the west is Yad Vashem, the memorial for the six million killed by the very hatred that Herzl saw brewing. Proof that his dream came too late.