Throughout the Summer of 2009, Bangitout's world renown Film Critic, Jordan Hiller, will be reviewing:
THE 25 ESSENTIAL JEWISH MOVIES OF ALL TIME
bring it. 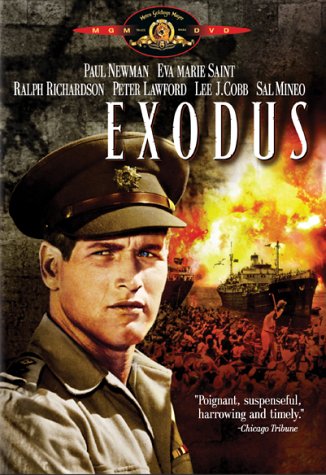 The screenplay for Otto Preminger’s 1960 film about the labor pains and eventual muddled birth of the State of Israel was adapted from the epic 1958 novel written by Leon Uris. The name of the film, and many will tell you the story itself, was adapted from the work of a mysterious, but ultimately purposeful God of many names. Exodus represents the tit le of one of the five books of the Jewish Torah, and in it the Hebrew people, enslaved by Egyptian masters (and a murderous, psychotic Pharaoh), are redeemed by Moses, cradled by the hand of God through the desert, and brought to a promised homeland. The film, now a borderline classic, encompasses a similar theme, however the story takes place in1947 and in a post-Holocaust world where the Jews are not so much captive and downtrodden as decimated, reeling, directionless, and desired by no one. There is no definitive wicked nation from which to flee or rebel against or be redeemed from as in the biblical version. If anything, the antagonist is a tragic fate; if anyone, the oppressor has been a seemingly absentee God.

Watching the film again, it struck me how sadly little (nothing) has changed in terms of strife and turmoil in the region, but also how much is forgotten in terms of the country’s origin. Nowadays it is almost a valid criticism that Israel was created only as a result of World War II. To say that if not for the six million being tortured and hung and starved and burned and shot and gassed and raped and experimented upon (exterminated, generally), Israel would not exist and the Middle East would be just fine and dandy. Whether that sentiment regarding stability is true or not, it is incredible how trivial the post-Holocaust sympathy for the Jewish people has become, as if it wasn’t properly earned or deserved. As if it weren’t appropriate or reasonable under the circumstances for the United Nations to collectively extend a small territory as refuge for this maimed and crippled people. A people massacred with a calculated cruelty on a scale never seen before or since.

Exodus was written only a decade after the liberation of the camps, where ghoulish looking skeletons walked blank-eyed into the light from blood and shit stained barbed-wire and rotting wood cages. If anti-Semitism is the given nature of the gentiles as the Jewish teaching suggests, then the cure for it apparently is the extreme manifestation of its awful seething wrath. One can loathe too far it seems. I have no doubt nor do I particulary care that Nazis contributed mightily in providing the Jewish people a place to call their own. Not only did Hitler create the perfect storm historically and politically, but he equally gave shape to the sort of Jew that knew there was no alternative to having a homeland, an army, a self-reliance, and a commitment to survival at all costs. The sort of impossibly focused Jew played by Paul Newman in the film. Nowadays we have a strong kollel movement and a righteous anti-Medinah movement; which tells me that our enthusiastic critics are not the only ones with the short memory.

Preminger’s film never overtly attempts to justify Israel’s existence and clearly never felt it had to, which is really an astounding thing to behold considering today’s climate where being politically correct is the status quo (and demonizing Israel is politically correct). That is not to say the film avoids exposition; in fact it is exposition heavy to a dull fault, but only regarding the socio-historical context of Israel’s independence. The British occupiers of the land are depicted as decent enough and the Palestinians peaceably inclined (but understandably distressed as their land is being given away without their consent). The revelation is that in 1960 justification for Israel was obviated by the very circumstance that brought about its existence. The treachery of Irgun, the deceit and militancy of Haganah, the violence against an unmotivated British force that really had no desire to babysit the region to begin with. None of it is depicted with any real eye for an eye satisfaction. Yes, one British officer played by Rat-Packer Peter Lawford delivers some throw away anti-Semitic rhetoric, but the script patently avoids casting any one nation in a fiendish light. It’s all matter of fact clock work storytelling with Exodus. Point A (Holocaust) to Point B (British occupied Palestine) to Point C (Free State of Israel). If you don’t get why that makes sense…the movie assumes you never will.

As a record, Exodus is a valuable tool (especially considering that it was filmed entirely on authentic location), and for young Jews it may serve as a reminder and a source of pride, but as a work of art, it comes up well short.

Beyond the infuriatingly wooden acting and credibility defying accents, the style of filmmaking is simply too polite and serene to carry the edgy, dangerous material of Uris’s novel. The studio (a.k.a Jews with an agenda) seemed to believe that if enough beautiful (preferably blonde) people performed together, all speaking stoically and thoughtfully, the audience would be seduced and entranced throughout the over three hour cinematic event. The truth is, the story is powerful and rousing by its own right (though likely not so much to Arabs and Englishmen), however, moments which should be exhilarating, are merely moving because you just don’t get the sen se that any of the leads are feeling it (some of the supporting characters like David Opatoshu as the malevolent head of the Irgun come off far better). Stars Newman and Sal Mineo and Eva Marie Saint (in a bizarre role and performance) are conscientiously going through the motions, but never buying into the hype. Audiences of course will not swallow any old line just because it is projected from an attractive mouth. If only the film had not been made by the time Spielberg reached his Saving Private Ryan, Munich glory days. We would have had ourselves a raw subtitled masterpiece.

With all its flaws, Exodus ends well, but in a way that exemplifies its overly dramatic tendencies. Newman’s General Ari Ben Canaan stands over a grave where the bodies of an idealistic Jewish girl who looked like a Swedish model and his close friend (Arab Taha) have been laid to rest, both casualties of an agonizingly complicated conflict – one that is only a day old. Ari says, “I look at these two people, and I want to howl like a dog. I want to shout “murder” so that the whole world will hear it and never forget it. It's right that these two people should lie side by side in this grave because they will share it in peace. But the dead always share the earth in peace. And that's not enough. It's time for the living to have a turn. A few miles from he re, people are fighting and dying and we must join them. But I swear on the bodies of these two people that the day will come when Arab and Jew will share in a peaceful life in this land that they have always shared in death.”

It is sixty years and a lot of senseless death later, and both Jew and Arab continue to wait.

stay tuned for the next of the TOP 25 JEWISH FILMS OF ALL TIME!