www.bangitout.com   Jordan Hiller's 25 Most Essential Jewish FIlms continues with one of your favorites… I wonder if African Americans today worry about what they would do if this nation ever decided to reintroduce slavery. Or whether Christians lose sleep over how they would react if the Coliseum was rebuilt and once again they were subject to being tossed alive to hungry lions. Seriously, if a race or religion at one time suffered a horrendous persecution, does the fear of it recurring become ingrained in their DNA? Does the completely non-theoretical belief that a dark history may, can, and will repeat itself linger in all victims of ethnicity based abuses?

The reason I ask is because I am Jewish and I often ponder where I would go, what I would do, and most troublingly, how I would protect my family should another Holocaust type situation begin to escalate here.  And because I take these grave thoughts seriously – delusional paranoia or not – I literally come up with answers and allow dire scenarios to play out in my head in order to gauge and prepare my reaction for when and if the time comes. I think about which non-Jewish friends I would trust to keep my children hidden. I imagine the jeep pulling up to my home, a soldier checking my mezuzah and knocking, pistol drawn, motioning for me, Amy, Cory, Maya, and Jack to join the truckload of Jews assembled outside. I picture the long marches through Indiana in winter and the moment where they send me to the right and everyone I love to the left.

What will I do?

After some deliberation, I always come to the same conclusion. I would be eliminated very quickly. I’d refuse the order with a John McClanesque creative burst of expletives or take one good shot at the soldier at my door – maybe even somehow kill him – and that would be the end of me. I’d do one brave thing and it would knowingly be my last act. Maybe my death would inspire others to fight back, but who knows?

In the end, however, I fully comprehend that a bullet in the head is but a selfish and cowardly way out. Why? Because my family would then be on their own. That is the part of the scenario I can’t ever figure out. My responsibility to the helpless children ruins everything. If I can’t prevent their suffering how could I possibly bear watching it? How could I ever allow them to see me grovel and plead at some cold blooded oppressor’s feet? At the same time, how dare I abandon them in a maddening state of terror? As a father I am stuck between two unfeasible disgraces. Children devastatingly complicate simple trips to the mall; imagine trying to keep them happy, sane, and secure in a work camp where emaciated bodies are burned nightly and bread crusts represent dinner.

What will I do? 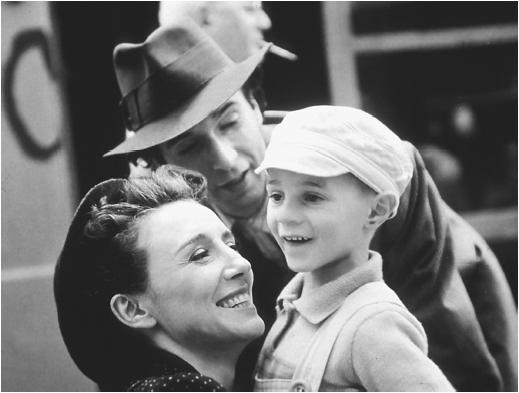 Roberto Benigni’s miraculous Life is Beautiful (La Vita è Bella) provides a most stunning example of precisely the sacrifice a parent is capable of making for their child in the gloomiest of hours. The polar opposite – to say the least – of my shameful escape. Life is Beautiful is an award winning, splendidly crafted motion picture. More significantly, it is an overwhelming, gut-wrenching lesson in a parent’s extreme threshold for courage and love.

It is difficult to describe Oscar winner Benigni’s accomplishment relating to this movie. If he were the writer and director alone (which he is), words would not do justice, but his performance as Guido Orefice, a genuine open-hearted, sublimely natured optimist, at first wooing a woman (“BUONGIORNO PRINCIPESSA!”) and then navigating their eventual family which comes to include a son (marvelous five year old Giorgio Cantarini) through Nazi occupied Italy is honestly one of the most captivating instances of genius, wit, and emotional turmoil ever displayed on screen.

The first half of the film has nary a mention of Jews or war. We wouldn’t even suspect Guido as Jewish except that about thirty minutes into the movie someone paints his uncle’s horse green and vandalizes the animal with anti-Jewish slurs. He just seems like your ordinary clever, passionate, spirited clown with a gift for storytelling and a magnetic charm. He is also the darling of chance, as wonderful coincidences and fabulous twists of fate seem to constantly benefit whatever ruse he is running, especially when it comes to the romancing of his beloved Dora. And clearly, based on her stock and circumstance, she is 100% prime Italian shiksah, but since Guido is hardly Jewish, the issue is never raised.

But Guido’s life, truly full of dreamlike beauty, changes dramatically in the second half. The film’s title, which very well could have been a straightforward declaration prior to the war, becomes a source of twisted irony once we witness Guido pull down the grate outside his humble bookshop and the words JEWISH STORE are seen sprayed across the green metal in a callous shade of red.

The best films about the Holocaust are the ones where proper attention is paid to the contrast between before and after. Where the downward spiral, the crumbling of civilization is allowed to develop and reveal itself in all its shockingly malefic glory. One day, a devoted couple, secular in their beliefs, united only by transcendent love, is comfortable and content and plan their child’s birthday party; the next day there is a collapsed table in their dining room, a cake is sickeningly overturned on the floor, and the Jewish husband along with his half-Jewish son are being transported to a death camp. To complete the portrait of disaster, the broken wife and mother voluntarily steps into the cattle car to join her Jewish husband and their son on what surely could be a fatal journey.

Such is the allegedly beautiful life confronting Guido and his once sunny outlook.

Instead of surrendering to depression, for the child, for the tremendous love of his good and sweet little boy, Guido creates an elaborate game of the nightmarish circumstance, and aims to keep his son alive and oblivious until…well, until God or some other supreme force intervenes.

Life is Beautiful is often described as a fable because in actuality, the mysterious providential strokes of fate which Guido enjoys tend to fall on the wrong side of possible. It is also incredibly light hearted (in a most seductively amusing way) despite the severe material. The manner in which Guido’s fortune is manifest, in both the labor camp and prior thereto, is certainly the stuff of quasi-fantasy. If there are breaks to be caught even in the face of imminent destruction, Guido seems to have been gifted a magical net. Call the film a fable if you will, but the result of Guido’s faith and wild efforts are of no consequence to me. Whether his desperate attempts to shield his son from even a fraction of the pain and anguish surrounding them succeed is utterly irrelevant to the grandeur of this once in a decade masterpiece. The message of Life is Beautiful cannot be limited by its level of credibility. As parents, Benigni exclaims, we must try and try and keep on trying until that final breath is rudely demanded from our bodies. That is the only viable option for the sake of our precious children.

So after seeing Life is Beautiful, I ask myself that same old question: What will I do?

The answer remains to be fiercely contested in my head, but certainly the ideal is set for when and if the time comes. For now, I gratefully say to Mr. Benigni, Grazie and Dio vi benedica