It is often overlooked that in the usual model of classic Jew-as-other literature, one character roundly escapes the ugly stereotypes and survives to represent something graceful and beautiful, something worth redeeming by the good Christians. That someone is of course the young, raven-haired, meek, mild, oddly pretty, blameless due to merely an unfortunate parentage, agreeable to fleeing her past and home Jewess. The Jew of Malta has Abigail to counter her rich, conniving father Barabas. The Merchant of Venice presents desirable Jessica to contrast ducat obsessed Shylock. In Ivanhoe, the lovely Rebecca can heal while her father Isaac is a grimy money lender. And I can’t really fault Marlowe, Shakespeare, or Sir Walter Scott for picking up on this phenomenon. Have you ever checked out some of the matches on OnlySimchas? As a general rule, our women are far more appealing than our men. Honestly, some of these guys are lucky the culture dictates attractiveness based how one rates on the shteig-o-meter as opposed to one’s ability to breed genetically pleasing offspring (as is the common standard in the rest of the civilized world). If orthodox Jewish males were obligated to marry and mate by scoring phone numbers in a bar or club we’d be extinct. And sometimes I think that there won’t be another Holocaust simply because of Natalie Portman and Scarlett Johansson, they are such wonderful ambassadors for our utility. Then I think of Adam Levine and Zach Braff and I get worried again. Regardless, because Jewish men are required to arm themselves with so many identifying symbols (yarmulke, tzi-tzis, baldness, noses the size of giant strawberries, and the circumcised shmeckle), our young ladies – as charming as any other nationality – have the distinct capability (advantage? temptation?) to blend in. Hiding Judaism is a recurring initiative in our history, and for obvious reasons. The authors of classic Jew-as-other literature naturally couldn’t resist fleshing out the premise.

Sandra Goldbacher wrote and directed 1998’s The Governess and the film looks and feels like the adaptation of a classic. If Jane Austen or a Brontë sister were inclined to revolve their tale of forbidden love and parlor room intrigue around a Jewish heroine, The Governess would undoubtedly resemble the result.

Rosina da Silva (breathtaking, angelic, marvelous Minnie Driver), the daughter of a warm and comfortable Jewish family in early 19th century London, leaves home on a strange whim after her father is killed in a mugging to become a governess (nanny/teacher) to the Cavendish family who reside in an isolated Scottish castle. Without much explanation we learn that Rosina will attempt to pass as Italian while on this particular adventure. The family consists of a friendless and slightly bratty girl, an impulsive son (Jon Rhys Meyers), a desperately ambivalent mother, and a distracted scientist father. What ensues is a very Jane Eyre-esque love affair between Rosina and her employer (the troublingly “consumed” Tom Wilkinson) which predictably ends in conflict and disaster. Despite the unfortunate manner in which things play out, to see Driver portray Rosina in the throes of passion – a Jewish virginal girl exploring sex, lust, and love for the first time – is to watch a candle burst into a gust of flames. This is one tantalizingly hot (yet utterly tasteful) period piece. I never realized how madly enchanting Minnie Driver could be.

Enchanting is certainly the right adjective here as Goldbacher attempts to flip the Jewess myth on its ear. As described earlier, the radiant Jewish female always escaped Christian ire (in literature) due to her comeliness and willingness to jump heathen ship. Rosina arrives at the Cavendish estate amidst a pounding rain storm dressed in a black high necked dress with a spire of dark hair wound and cupped atop her head. An ominous image for the already teetering stability of the family. After entrancing and bewitching the men in the home she turns them against each other, publicly exposing their indiscretions and weaknesses, and embarks back home. She leaves the family in ruin. And when she does this in a final sweep through the formal dining room, she is dressed as she was upon arrival, but this time her pale neck is adorned with a gold Star of David. It is truly as if a Jewish sorceress had paid the family a brief destructive visit, cast her spell, performed her evil, and vanished. That is one fair interpretation. After all, Jewess as witch is a theme mentioned in the film. 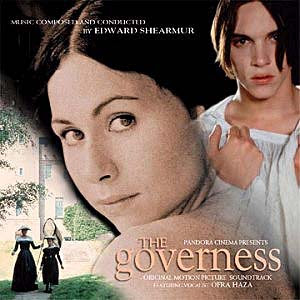 While there are certainly distressing elements to Rosina’s influence on her host family, there are achingly beautiful symbols of traditional Judaism in the film as well. Whether it be Rosina’s lighting of Yom Tov candles and the spare Seder she conducts in the dimness of her room with joyful memories of her aunts attempting to eat eggs dipped in salt water dancing through her head. Or her lingering after the Cavendish’s leave church so she can utter a lonely, bitterly sincere Shema (as the film begins in a lavishly ornate synagogue with the Shema being read). Or, most hauntingly, as the girl, so far from home, so confused by her Gentile surroundings and the feelings raging inside her, wraps herself in her father’s tallis as if a comfort blanket and rocks on her bed whimpering prayers to her father’s God.

The Governess is so many things. The Jewish element can either be regarded as extraneous or imperative. The crux of the film – young girl leaves home for romantic journey of self-discovery that proves to be more trying than expected – could have been just as effective if she were not Jewish and hiding her Judaism. The Cavendish’s do eventually find out she is Jewish and it hardly makes an impression. Maybe they frown upon her beliefs, but there is no sense of urgency in the keeping of her secret. In a way, the only consequence of her being Jewish is that the upheaval she causes will now be attributed to her fiendish people as opposed to simply her as an individual.

But as a Jew, I watched the film differently. I could understand her desire to be just accepted for who she is and not for the anchor of her heritage. We all sometimes just want to blend in and just be. Goldbacher got that part right and the counterpoint right as well. Rosina can realize her deepest passions and fulfill her most uninhibited desires, but as someone with a nurtured Jewish soul, if she intends to find true happiness and acceptance, she will ultimately wind up where she feels most at home. In the embrace of her prayer shawl with Shema on her lips