25 Essential Jewish Movies: A Stranger Among Us (Interview with Screenwriter Robert Avrech)

Stra nger Among Us!

www.bangitout.com Jordan Hiller sits down with orthodox screenwriter Robert Avrech in his final countdown to his 25 Essential Jewish Movies

#5 A Stranger Among Us

If the individual components of Sidney Lumet's A Stranger Among Us were broken down and analyzed separately, they might fail to inspire much confidence in the final product’s potential. From the choice of pixie voiced Melanie Griffith to play a veteran cop, to a devout concentration on atmosphere over plot, to an arguably pro-ultra orthodox Jewish agenda, to the incorporation of a well tread religious ascetic versus secular maverick conflict, to a title that screams Lifetime movie of the week. One could reasonably have expected to encounter a film with minimal entertainment value, even less depth, and surely no philosophical resonance. Instead, writer Robert (Body Double) Avrech infuses his wonderfully original and daring script with one startlingly insightful moment after another. What could easily have been another irritatingly earnest, clueless depiction of orthodox Jewish stereotypes, unfolds as an involving, challenging, and (most importantly) respectful treatment of our oft misrepresented religion. Over and above this unique achievement, Mr. Avrech allows for a film to be established which expresses an affection and profound understanding of Judaism while never becoming cloying, overbearing, or false hearted. The film subtly enlightens its audience regarding not only very intricate Jewish practices and customs (hafrashat challah, payos, kabbalah, shidducim), but issues ranging from theology to history to tradition. And it does so with a natural flow of dialogue and emotion between truly human, unconventional characters who struggle with every day dilemmas as well as their religious awareness (or obliviousness).

So how does the film manage to reach such a sublime level of accomplishment given the somewhat repellent ingredients listed above? Perhaps A Stranger Among Us is much like Judaism itself. The splendor of the overall experience confoundingly manages to outweigh and outshine the sum of its parts.

“They key,” Mr. Avrech told me this week from his office in Los Angeles, “is that we didn’t formulate the movie as being about Judaism. We had a crackling good story, a wonderful romance, with great characters, and the Jewish elements just went along with the material.” 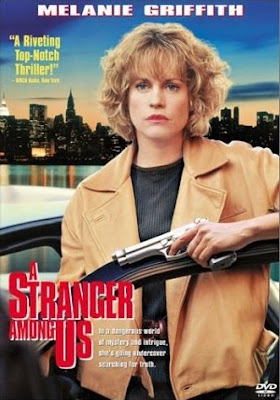 A Stranger Among Us certainly has an interesting story revolving around the shocking murder of a young chasid who works in New York’s Diamond District. The investigation is conducted by Detective Emily Eden, a troubled soul in need of substance, who is prone to greet friends and acquaintances with a bland and hopeless “What’s new and exciting?” Without clichéd protests or patronizingly comedic montages, she winds up undercover as a chasid and living with the Rebbe’s family. Whether that contrivance is palatable or not, it gets the movie to where it needs to be. Lumet and Avrech’s comfort zone here is not in relating a whodunit mystery which essentially lays dormant for a good chunk of the film only to return in the end as if to remind us of a forgotten loose end. Though the crime’s resolution is excitingly handled and surprising enough, such temporal trifles pale in comparison to the mysteries A Stranger Among Us seeks to explore. Like the mystery of a tremendously warm, divinely invigorating Shabbos, or the mystery of our devotion to God who we do not see over human beings who may be right in front us.

And in reflecting that last difficult Jewish principle, the film rises above and beyond its similarly intentioned predecessors and imitators. “I wanted Judaism to be portrayed as exotic and romantic as I feel it is,” Mr. Avrech convincingly said.

Emily, as played with charm and sophistication by Melanie Griffith – her acting style requiring some patience before we can confidently allow it to wash over us in a pleasant wave – is unapologetically sexual. She is not trashy or obscene. She simply is open and relaxed when it comes to the dynamics involving male/female attraction. Her counterpoint is Ariel, the Rebbe’s son (EricThal in a mesmerizing performance), who is equally comfortable with who he is and, more significantly, who he is meant to become.

It would betray the eloquence of Mr. Avrech’s words and Mr. Lumet’s direction to attempt a deconstruction in this article of the complex, passionate, controlled, seductive, torturous relationship that Ariel and Emily develop over the course of the film. Suffice it to say the relationship is forbidden and surely not bashert, but at the same time, the voids in each character can be filled by something within the other. The script is intelligent and admirable enough to firstly admit that this is possible; that a Yirai Shamayim, an Iluy, can have strong, honest, and even pure feelings for a beautiful, sensitive, compassionate shiksa, and secondly to take this provocative romance to the limit of possibility, but not beyond. The result is heartbreaking (“The kabbalah says….I’m going to miss you”) instead of tantalizingly controversial.

A Stranger Among Us opens with a group of cute ultra-orthodox boys reciting Birkat Hamazon, the grace after meals. The prayer is said not merely after a meal, but specifically after a meal in which the man or woman who ate was satisfied. There have been many films depicting or attempting to depict genuine, authentic religious Judaism. Many have done so with ulterior motives. Others with the proper intentions but failed in the execution. Mr. Lumet and Mr. Avrech, two Jews with very different theological perspectives, have collaborated to give us something considerably satisfying to chew over.

Q: How do you sell a Jewish movie to a studio?

A: You don’t. Hollywood is a business. Religion is a no-go and always has been. The studios will always try to put something out there that appeals to the greatest audience. Anything that is pushing a political or religious agenda they believe will alienate an audience. Personally, I have an intimate knowledge of and affection for the Jewish world, and because sometimes I see great drama in that world in its authentic guises, I can write a movie that is universal, but imparts information as well.

Q: This movie has mainly non-Jewish actors playing Chassidim. I have seen both approaches when making a film about orthodox Jews in terms of using Jewish actors or not. Is casting important?

A: Sidney and I had long talks about casting. Casting was very important. He always said that you can make up for a lot of things during the shooting of a movie, but not bad casting. We decided to use the best actors, whether they were Jewish or non-Jewish. My wife Karen’s father was the Rav on set and showed the cast how to act and talk Jewish. Actually, working with non-Jewish actors was easier because they are blank slates and can be taught the right way to do things. Jewish actors sometimes think they know everything and argue when being instructed. They are kind of set in their ways with their prior knowledge and won’t change despite being told otherwise.

Q: Was there ever the notion to push Emily and Ariel’s relationship farther?

A: Disney wanted them to sleep together. Sidney, who is a totally secular Jew, really stood up for the script and told them that it would destroy the credibility of the characters if they slept together. Disney thought the film would be more successful if there was more of a physical relationship between them. Sidney said something then that is really true and after that they left it alone. He said, “The more specifically cultural you make your characters, the more universal they become.”