Taking Back the Scarf 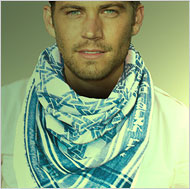 The keffiyeh has always been associated with the garb of Intafada'd out Palestinians interested in murderous jihad, throwing stones and blowing up Israelis.

In recent years, the kefiyeh has certainly taken on a stylistic place in indie hipsterville, and even among more mainstream fashionistaville – heck even Kanye West wears one from time to time. Making it almost a Hip Hop musthave.

This brings us to indie hipster Jewish Brooklynite DJ Erez Safer, who performs under various names like Diwon, DJ Handler and runs the website www.Shemspeed.com has started selling his own brand of Jewish Keffiyehs at www.thekef.com.  The new Israeli keffiyeh, designed by Baruch Chertok of www.dveykus.com has jewish stars and am yisroel chai written all over it…and actually looks pretty damn cool.  Apparently the arabs are a bit pissed as noted in this NYTIMES article written by Robert Mackey    However, I wouldn't get too hung up on gear these days, Israelis have been sporting these scarves for years (what Israeli girl doesn't have that as a must have accessory? – plus they make great tichels) and the only reason there isn't too much press around it, is because we don't wear them as homicidal killer terrorist masks.  If that's what arabs want to retain as their own, be our guests. That's certainly not our style.

note for the record:: Keffiyah has almost the equal amount of different ways to spell it as Chanukah/Hanukah/Jannukah does.  See we aren't so different afterall!