Hilchot Shkoyichgeben (AKA “Thanksgiving”) By The MaMaB (Martin M. Bodek) I Mesoyreh: One must engage in a seudah to celebrate the heiligkite of the yuntif. ... 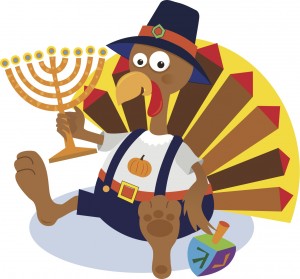 Hilchot Shkoyichgeben (AKA “Thanksgiving”)
By The MaMaB (Martin M. Bodek)

Mesoyreh: One must engage in a seudah to celebrate the heiligkite of the yuntif. It’s brought down in the May Achuz that this heilig day is heiliger than Chalamoyd and Hoyshanarabba combined!

Lechatchilah: One should sit down for the meal after plag hamincha, but before tzais, so that it take place at a time when the original nayce of shkoyichgeben occurred.

Bidieved: If you are chasidish, you can have it any time during the day, because, as the SHL’A famously said, “We are not aware that there are clocks in heaven.”

Mehadrin: One should invite guests, wear a kittel, drink four cups of cranberry juice and remember to recite, “He oyf anya.”

Mehadrin min hemehadrin: One should wear a belt with a large buckle instead of a gartel and the children should all wear their hats with new Native American names, like “Shlepping Ausvorf” or “Pear Fresser.”
II

Lechatchilah: One should be makpid to watch an entire football game, whether or not his wife needs help in the kitchen with loading the turkey in the oven.

Bidieved: If one can’t watch the entire game, one should at least be sure to watch one Geico and one Budweiser commercial, and will be soymich on poskim who hold that this is the minimum choyv to be mekayim the mitzvah.

Mehadrin: Tzadikim should go the football game itself, and it is mutar to pay one Shabbos meal’s worth to purchase the tickets.
Mehadrin min hamehadrin: One should jump from the stands and run down the 50-yard line. If security tackles you before you get to the field, you’re not yoytzeh yidai chavoosoy.
III

Lechatchilah: One should say “gobble gobble” to at least two different neighbors. This must be done by day, as the ness of shkoyichgeben happened during the day.

Bidieved: If one is tired from shlepping the turkey all the way from the store, into the car, up the steps, onto the counter, one is allowed to say “gobble” to one neighbor.

Mehadrin: One should insert “gobble” into his sentences like the Smurfs put “smurf” into their sentences.

Mehadrin min hamehadrin: One should say nothing but “gobble” all day, while bobbing his head back and forth, waddling and birthing turkey eggs.
IV

Mesoyreh: The Korban Turkey should be eaten on the last Thursday of choydish November.

Lechatchilah: One should eat turkey.

Bidieved: If one is too poor to eat turkey, one should sell his wife’s jewelry to afford it. If one could never afford jewelry for his wife, one may sell his children into child labor until he has enough earning to buy a turkey. If one has no children, he may enslave his wife. If one’s wife is too weak to apply rivets to cars coming off the assembly line, one may substitute chicken.

Mehadrin: One should have turkey with Wild Turkey.

Mehadrin min hamehadrin: One should have turkey with Wild Turkey while running a local Turkey Trot, acting like a turkey, and at the end of the seudah, singing “L’shoonoo haboo b’Turkey!”
V
Mesoyreh: One should partake in a parade to be yoytzeh the concept of “Seesee v’simchee.”
Lechatchilah: One should sit down in front of his monitor with his wife and children with hot chocolate in everyone’s hands.

Bidieved: One may leave the room to do his usual morning learning, but his wife must be certain to call him back in to see all the good parts.

Mehadrin: One should sit on the couch from beginning to end, with a bedpan if necessary, to be sure to hear every word. If one misses a word of the broadcast, one may visit his shaygitz secular neighbors to review the broadcast on the treifineh yaytzer horah that is called the DVR, loy oolayknee.

Mehadrin min hamehadrin: Equal s’char is given to those who work on themselves all year to be able to watch the Rockettes without succumbing to hirhurim and to those who look away every time they show up, but are still careful to hear every word.
VI

Mesoyreh: It says in parshas Vayiglach that one should eat the seasonal harvest foods on yom nutnimtoda.

Bidieved: If one is already poor from buying Chanukah gifts, one may be lenient and consume pigeon, yams, cranberry juice, zaft from a gefilte fish jar, and whatever the shaygitz neighbors left over from their Halloween pumpkin carvings.

Mehadrin: One should use the turkey used for kaporos shloogin and shechted by a chasidishe kohen, sweetened sweet potatoes, cranberry peach mango juice, galleh and pie slung into his stomach from a punkin chunkin machine.

Mehadrin min hamehadrin: One should do all this while dressed like a native american pilgrim and pardoning the turkey while watching football on his monitor, the parade though his neighbor’s window, The Discovery Channel’s Punkin Chunkin on picture-in-picture, while saying “gobble gobble” to the neighbors, who are now calling the cops because the guy next door is seriously unstable.

Martin Bodek is co-founder of TheKnish.com, beat reporter for Jrunners.org, surname columnist for Jewishworldreview.com and proud proprietor of his own new bookstore. Browse around!: http://www.lulu.com/spotlight/mbodekatgmaildotcom

Previous post Soon By You Episode 3: The Shabbat Meal