On Friday Night, the soft spoken reggae artist Matisyahu graced the West Side Institutional Synagogue and simply stood up, spanned the crowd of 400+, and said, "I'm ready for your Questions."

The anxious jam packed crowd at the "Rock N' Roll Shabbaton", orchestrated by mover&shaker rabbi of the year

Rabbi Shlomo Einhorn, asked him what probably all of us have been wondering since the variety of ambiguous articles and conversations floated around Jewish newspapers, blogs and shabbas table discussions regarding Matisyahu's sudden break from Chabad, and possibly yiddishkeit all together. (Say it Ain't So, Mo)

Matisyahu did just that. Stating that his initial induction into Judaism was "entirely focused on the Chabad system", his own personal path to spirituality, his progress, as he put it, had now reached the point to opening up to the many other "Chasidic" philosophies to reaching Jewish spiritual heights. "I had a very straight and narrow understanding of Yiddishkeit from what I learned in the Chabad yeshivas, that's really all I knew about Judaism. And now I've had the opportunity to grow, open up and learn more and more about the depths of Torah, kabbalah from new perspectives." Continued the now almost greyhaired Matisyahu, "Just look at me! My kippah is still on my head, my beard still on my face, this is who I am!"

While he bottom lined it with the answer to that question, it was the way that he answered the several other extremely personal questions that seemed to solidify Matisyahu's incredibly sincere religious commitment to the fascinated crowd. He talked openly and candidly about his time on LSD following the band Phish, his initial davening on the rooftops of the New School dorms at sunrise, his spiritual methodology of writing songs, his deep connections to his favorite Biblical hero, Matisyahu (shocker?). Above all was when he talked about how he views of performing on stage for thousands. "When I'm on singing stage, I keep one thing in mind, that all the intensity, all the energy up there is simply just me and a crowd of thousands of others singing directly to G-d."

This guy is legit.

The entire bangitout staff was pretty awestruck by his candor and his composure. He indeed is still the real deal. 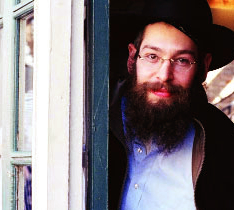 Matisyahu ended off his Q&A by performing one song, which surprisingly was just a classic and simple Chasidic niggun, not unfamiliar to most.

But as the song progressed, his intense shuckling and the sound of his powerful voice quickly transformed the basic nie-nie-nie melody into a heartbreaking supplication, a cry almost, to the divine.

The audience, already awestruck from the sincerity of his Q&A, sat quietly, almost shamefully, wondering how they could have ever doubted the deep religiosity of such a sincere and talented young man.

Some additional factoids from Matisyahu's Q&A:

1. His favorite song of his: Late Night In Zion

2. Confirmed: In the midst of working on a new album

4. Moment of Israeli acceptance: brought out to do  "Roxanne" with Sting in Tel Aviv

5. Favorite Biblical character: Matisyahu, because he brought Jewish pride to the religious and secular

Previous post An Open Letter to the World (Hysterical)